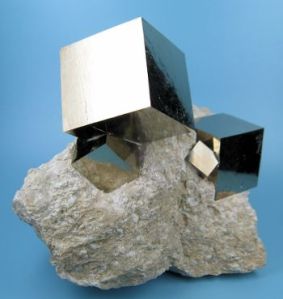 There a thousand reasons why something could go wrong in your new home. Maybe the quarry hit a bad batch, maybe the glass was made at the wrong temperature, maybe the boiler was dropped on the van, maybe the lads had a night out.

The new building control system thinks that one person can see everything and that you can sue them for negligence for any problem. This is not good enough. When you buy a new home, just as when you buy a new car, you should have consumer rights, legal protections and immediate solutions. These homeowners have none and the new system will give them no new rights (see previous post here)

In the following article from 18th March 2014, Edwin McGreal examines the problem of Pyrite in homes in Mayo.

‘SAVAGE’ is how Erris County Councillor Gerry Coyle has described some of the damage caused by pyrite to houses in his locality. He also told The Mayo News that blocks used to build some houses in the area are now crumbling ‘like Weetabix’.
A Belmullet Electoral Area meeting last week heard that two local-authority housing estates in the Erris area have developed structural problems due to the presence of the dangerous mineral pyrite in building blocks in the houses.
According to Cllr Coyle, one of these is the Carrowteige Estate. He says there is an issue with pyrite throughout the estate, but cannot be sure exactly how many houses are affected.
“The damage to houses is savage – there are huge cracks, the blocks are like Weetabix crumbling. Plaster knocked off. It’s very bad.
“I am aware of almost two dozen houses locally in Erris with the problem, and I do not think this problem is confined to the Erris area,” Cllr Coyle said.
The councillor added that he also knows which quarry the defective building material originated from. He stated that it was not a local quarry in the Belmullet area.
Mayo County Council Director of Services for the Belmullet Electoral Area, Martin Keating, said he believed the blocks came from outside the county.
“The most likely scenario is that the blocks were imported when local producers couldn’t keep up with the demand at the time. I imagine the material could have come from the same area as where the problem was evident elsewhere in the country,” he said.
Cllr Coyle also said that the affected houses appear to have been built between 1998 and 2008. “The biggest problem is that people will be left out of pocket and worse, without houses, as insurance companies may not pay for this,” he said.

National problem
The problem of ‘pyritic heave’, where the presence of the mineral pyrite has caused cracks in buildings, was believed to be limited to over 12,500 houses in the Dublin and the wider Leinster area, most famously in the condemned Priory Hall in Dublin. However, Mayo County Council has confirmed that two council housing developments in the Erris area appear to have a pyrite problem too.
Martin Keating confirmed that the council was keenly aware of the situation.
“There are two developments in this electoral area that have developed some structural problems. We have carried out fairly intensive analysis and initial estimates say that the pyrite issue is involved,” he said.
Cllr Coyle had raised the subject at the electoral area meeting, saying that at least one house in these two estates was now unfit for habitation.
“There is definitely one house which is unsafe to live in, the gable wall is so cracked. These all come from a certain batch of blocks [produced] from 1998 to 2003, but thankfully these blocks are not in the foundations, like they are in houses in Kildare and Meath,” he said.
Cllr Coyle told the meeting that a person can actually crumble affected  blocks in their own hand, they are so weak, and that homeowners only became aware of the severity of the problem in recent months.

State aid
A €10 million state-funded remediation programme was announced last month for homes affected by pyritic heave, but this only covers homes in Meath, Kildare, Offaly and Dublin. Cllr Rose Conway-Walsh asked where this left local-authority homes damaged in the Erris area.
“I’m concerned for people who will be looking at their walls and not sure about cracks,” she said. “Can Mayo County Council help them?”
Responding, Martin Keating said that he believed that social housing would be covered wherever there is damage, but that the situation was unclear when it came to damage to private housing in Mayo.
Mr Keating also said that in order to definitively know whether a building was affected by pyritic heave, a sample from an affected block needed to be sent for analysis.
He said that while the council did not have responsibility in relation to private houses, it could prepare a step-by-step guide for what people needed to do if they have concerns.