A ‘perfect storm’ for housing?

Housing is headline news at the moment and the new Minister for the Environment, Alan Kelly T.D., has his hands full. Link to RTÉ News: “Report shows serious housing shortage in Dublin“.

A perfect storm has arrived of accelerating house prices, falling planning applications and decreasing commencements and completions. From a political perspective, serious inroads need to be made on the housing crisis before the next General Election . We have commented previously on the continued fall in commencement notices, due to  S.I.9, so we do not intend to go into that aspect in detail here. The financial drag on the industry has been pronounced due to the introduction of S.I.9 and its associated increased costs that are now well established. With S.I.9 costing €700m per annum this is almost three times the Minister’s expected budget for social housing in the upcoming budget.

We table the following two posts from Dr. Constantin Gurdgiev’s blog “True Economics” to illustrate current issues. As readers of the BRegs Blog are aware we are keen followers of Mr Gurdgiev as he tends to “drill down” into actual figures and frequently gets beyond spin and other anecdotal commentaries on topics.

In his post from 25th September 2014  “Irish Property Prices: Scary Dynamics in Dublin, Relative Slumber Elsewhere” he analyses the much hyped property price increases in Dublin in particular. 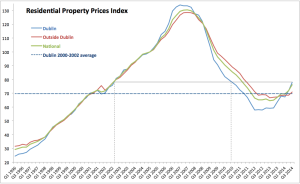 So not quite a bubble yet but definitely an area concern at present.

In his next article on the same day “Irish Planning Permissions Q2 2014: No Signs of Sustained Recovery, Yet…”  the author looks at recent figures from the Central Statistics Office for planning permissions in 2014. Observers could well expect a big increase in activity given recent price rises and media coverage about the construction sector rapidly gearing up again. The reality is quite different and it would appear that although planning permissions are slightly up, the overall area permitted is down indicating the type of work is small (house extensions etc). rather than additional dwellings. This will only add to any housing shortage. This bears out the BReg Blog team assessment from commencement notice figures also from the Building Control Management System. 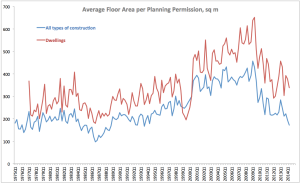 So a way to go before we see any real recovery or job creation in the industry. We may be seeing a classic “balance sheet jobless recovery” where price increases improve the balance sheets of lenders and NAMA, without any consequent benefit to consumers or house hunters. We will be doing an updated review of commencement notice figures also for September shortly.

‘Recovery’ is Still Worse than the 1980s Crisis

Irish Times: Dramatic fall in number of buildings being started